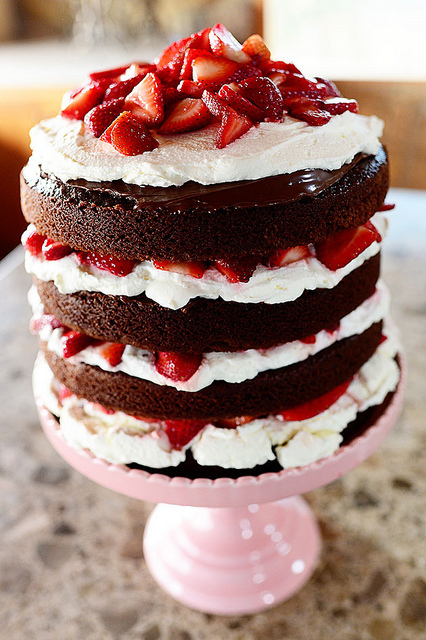 I stole this photo right off “The Pioneer Woman‘s” blog. Is that wrong?

I rest my case. This is the very reason I had to break up with my BFF. I know she has no clue that I exist, but whenever I read her blog, The Pioneer Woman, I usually go into some weird trance accompanied by evil spirits that force me to the kitchen to make whatever Ree Drummond is blogging about, and then my scales are the proof that I probably should not have cooked this or baked that. Breaking up is hard to do. (check that one out)

I admit it. I still read her blog every day. I still love her. I love her cows and her children. I would love to love her husband, The Marlboro Man, but that’s just wrong. Unfortunately, I do not get The Food Network channel. I do not watch much TV, well, except for Jeopardy which I try to watch every day. I used to LOVE to watch HGTV, but that got me into a lot of trouble thinking I could buy a repossessed house and flip it into something I could love and cherish, and live in for the rest of my life. I do love my house; I really do. But after five years, it doesn’t show much in the way of being “flipped.” They flip houses on HGTV in under an hour several times a day, and I cannot manage it in five years. But I digress. Just click here for more info on The House! I just do not have time to watch TV, so I got rid of all those amazing channels. Let me rephrase that. I choose to spend my time in different, what I consider more important, ways than sitting in front of the boob tube. I only miss all the channels every now and then, but especially when I read about Ree filming her Food Network show at her ranch in Oklahoma. Her film crew is British, and I would just love to see all of that action. She cooks for them, they film her. I like that. I love British accents! I could probably love a British man. Heck, I’m still waiting for my knight in shining armour (I spelled that the British way!). Those Brits, I tell you, they are made of some kind of sturdy stock. I love that too. I digress again. Back to the cake.

Where I come from, strawberries rule. I used to live in Plant City, Florida – the strawberry capital of the whole world. Strawberries as big as my palm were the norm. I love them, I really do. I also love whipped cream on them. I also love them on angel food cake. But I especially think this cake Ree has dreamed up has the potential to be my very most favorite thing in the whole world. If you look closely, you can see she even lathered on some chocolate frosting. I think I would probably even turn down the love of a British man for that cake. I shudder to think, but I would probably give up the love of The Marlboro Man for this cake. Whoa, that’s JUST WRONG! I think Ree is a very lucky girl! (I’m really NOT the cheating kind. Let’s just get that straight right now. But a great fantasy never hurt anyone – until it’s acted upon and I would never, I repeat, never cheat!)

Back to that beautiful cake. Cake is my favorite food group. I could truly live on cake and nothing else. Well, except for coffee. I have to have coffee and lots of it on a daily basis. But THAT cake! I know I will dream about it. I will see it today for the whole day while I attempt to stay on my Atkins diet with some sort of meat and cheese, and probably an egg or two.

Drum roll, please! It is day 6 of my Atkins diet, and I’m down 5.5 pounds. I will not cheat on Dr. Atkins either. It’s against my grain! I rest my cake, I mean case, and to Ree and her British crew, I say “Let them eat the cake!”