This is the second article about Shelley’s boots. While related to her article, it is not necessary to read the first to understand part two. 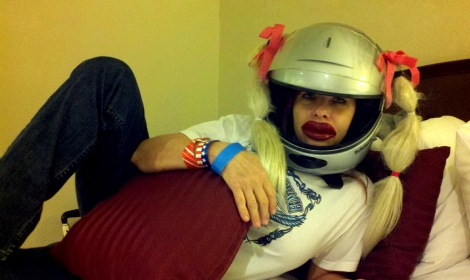 I received an email message from an out of state friend that her friend was selling a pair of brand new Harley-Davidson harness boots – never before worn, size 6.5. Apparently, he had purchased them for his girlfriend and for whatever reason, he now needed to sell them. At $40, they were a bargain and just my size! They arrived very quickly, but much to my disappointment, they were not the same boots as featured in the email photograph. They were also not the size “advertised” in the email message. They were a man’s size 6.5, which meant they were really about a woman’s size 8. I tried them on and practically walked right out of them. They were way too big. At first, they were stationed near my bedroom door for quite some time while I tried to figure out what to do with them. Then, they made their way into my closet! I even took pictures of them (that will prove to be vital information later).

Shortly after receiving the new boots, it was time to head out to Vermont for the Women On Wheels® Ride-In™. 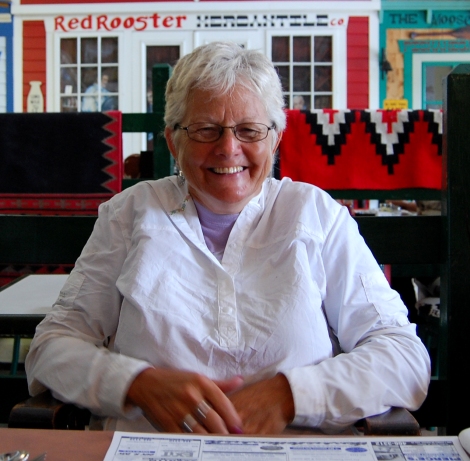 During the Vermont Ride-In™, I was quietly having a cup of coffee in the breakfast area one morning when our editor, Janis, walked in and asked, “Mind if I sit with you?” Of course,” I said, “Have at it.” Janis proceeded to ask where the Fab Five from Michigan was going after the Ride-In™ was over. I told her east, up the coast of Maine and into Canada. “WOW, that sounds like a great trip!” Being the WOW sista that I am, I invited her to tag along with us. I even had some roommates (Chris Brown and C.O. Fant) for her to cut the cost of the motel rooms along the way. So the morning after the Ride-In™, the Fab Five became the Super Six. So let the adventures begin! Stories were made and retold time after time, not to mention all of the fun, and the contest everyday to see who would be the last to be ready in the mornings (Jack or Janis).

One of the adventures was the crossing into the United States from Canada at the port of entry; in the lead was support member Lowell Hatfield from Bowling Green, Kentucky, then C.O. Fant from Frankfort, Michigan, who speaks the pure Boston accent even though she has lived 40 years in Michigan, next was Janis Perfetto with that fiery red hair from Perry, Georgia, Chris Brown from Grand Haven, Michigan, and then me, Shelley Guy from Zeeland, Michigan. As we went past the border patrol she asked, “How do you know all of those in your group?” I promptly answered from the international women’s motorcycle group called Women On Wheels® to which she quickly answered, “I have a bike and I ride!” I gave her the information to join and by the time she reached our tail gunner, support member Jack Vincent of East Jordan, Michigan, no questions were asked. Which isn’t exactly how we got into Canada – trouble free! But that’s another story.

Along the thousands of miles that we traveled, my very first pair of boots took to not zipping and holding together. Janis told me that she had this pair of boots just sitting at her house and the size was just perfect. She told me should would mail them. Well, I know now that Janis never goes straight home from any given ending point. There are always more things to see and do along her homeward route. Months passed, however, no sign of those promised boots.

These boots ended up being the subject of a comedy of errors (again, vital information for later). I packed them up to send to my friend Shelley, whose boots had literally fallen apart during our thousands of miles after the Vermont Ride-In™. This seemed to be the most difficult task of all. Finding a box to fit that was also suitable to mail took me forever. The box they came in was destroyed by the afore mentioned twins. Boxes are more fun than toys. All packaged up, I put the box containing the boots in the back of the Expedition. I didn’t drive the Expedition, my daughter did. But I was driving it that day and expected to go to the post office. My trip to the post office was cancelled when a horrific storm rolled through. I could do my post office errands another day. The problem came when I forgot that I had a package in the back of that vehicle to mail to Shelley. Back in my own truck, the boots escaped my memory banks. About a month later, I remembered that I had forgotten the boots. Daughter was out and about in the Expedition so I sent her a text message to mail the package in the back. I assumed the boots were on their way. Ahhh, but that’s what happens when we assume things…

Months later, I was once again at the helm of the Expedition. Again, I had something to stash in the back. I opened the hatch, and lo and behold, there was that package ready to send to Shelley. It’s just so hard to get decent help. I transferred the package to my truck in order to get them mailed the next time I made a trip to the post office. It was almost like this package was going to have to be on my “bucket list.” Finally, I got the things mailed off. I was worried that my dear friend Shelley was entering into riding season without a pair of boots!

Finally, one day the boots just showed up. Yea! The promised boots! I tried them on and walked around the house, but the left one hurt my foot. So I called C.O. and she told me that the boots were her size, and asked if I would bring them to her house when I came up for our Lakeshore/Lighthouse cruise which was about four months away. Finally a cold, wet, damp, rainy 175 miles later, the boots arrived at C.O.’s house.

Upon the last day of school every year, I head for the mountains of North Carolina for rest and recuperation. Even with my smart phone, the reception can be sketchy at best. After spending 10 days up there, I was on my way down the mountain for home when I received a call from my dear friend Chris Brown in Michigan. I was so excited to talk to her. But alas, the reception was poor on both ends. Mine due to the mountains, and hers due to a ride somewhere on the edge of Michigan. She was riding with Shelley and C.O. among others. It was great to hear her voice – when I could make out what she was saying. Something about boots. Funny questions. Like, “did you LOOK at the boots?” Of course I LOOKED at the boots. I tried them on. They were at my bedroom door for months. My “Mimi” boys played in them and I took pictures. I handled them several times trying to figure out what to do with them before I went to Vermont. They spent weeks in my closet where I saw them every time I got dressed. What did she mean, did I LOOK at them? That’s odd, I thought. The phone line kept breaking up, but I could make out some of what Chris was saying before the connection was lost.

C.O. tried them on, and for her, the right one didn’t feel right. She pulled up her pants leg, studied the boots, and exclaimed, “Well, these are not a pair! Look here, one is brown and the other is black. Even the Harley Davidson eagles are not the same, and the tread is also different!” We put a phone call out to Janis and even she could not believe the story that we were telling.

I consider myself to be above average when it comes to noticing detail. I am after all, a magazine editor! Did I hear her correctly? One is brown and one is black? The eagles on the boots are different! The treads on the boot soles are different too? How could I not notice that?

The loud laughter, the hoots, and even a hilarious recounting of the story on the bar patio in San Jose had many people laughing over a year later.

While I missed that the eagles and tread were different, how could I miss that one was black and one was brown? The one thing that didn’t escape me, is that somewhere out there is another pair just like these!

This article is from Women On Wheels Magazine® is copyright protected.